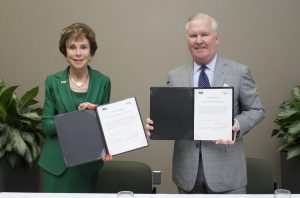 University of South Florida (USF) President, Judy Genshaft,  and The City of Tampa Mayor, Bob Buckhorn, signed a Memorandum of Understanding (MOU) on March 20, that signifies their willingness to work together to implement technologies that will improve the lives of its citizens and create a more effective and efficient government.

The Smart Cities MOU states that through this partnership the city hopes to showcase itself as a vibrant, innovative and sustainable community through new technologies and methods created through its partnership with USF and more specifically through the Center for Urban Transportation Research (CUTR) on the Tampa campus.

Lack of public transportation and severe traffic congestion is one of the most significant obstacles Tampa faces in attracting new start-ups and businesses along with corresponding workforce.

“To realize that it’s not just about roads, it’s about finding solutions. Transportation is a problem, and the solution isn’t more roads. It’s using smarter grids and using the talent at USF and moving it to real-world application,”  said Mayor Buckhorn.

Dr. Robert Bertini, Professor and Director of CUTR along with Jean Duncan, Tampa Director of Transportation and Stormwater Services, will sere as the representatives between USF and the city.

Yesterday’s signing was symbolic as the agreement has already been executed and USF graduate students are already working with the city to protect against cyber attacks on its traffic system, including traffic signals and bridges. Future projects could include traffic sensors and autonomous vehicles.

For more information visit the College of Engineering’s Facebook site to see the recorded event.

Important:
All images are copyrighted to their respective owners.